Residents 3000 was set up unofficially in 1992 when a group of people came together at Mietta’s restaurant to plan how to best represent the interests of CBD residents. Mietta O’Donnell and Tony Knox who operated Mietta’s in Alfred Place facilitated the establishment of the CBD residents group and provided the original meeting place for the association.

This coincided with Melbourne City Council “Postcode 3000 Program” jointly launched by the Minister for Planning and the Lord Mayor on 8 December 1992. The program was developed as an action plan for city living and aimed to encourage more people to live in the Central Business District of Melbourne. In those days there was virtually no residential areas in Docklands or Southbank.

The Residents 3000 became an incorporated association in 1993. It brought together a number of business people, residents, councillors, council staff and people interested in the city to create a body that would best represent the needs of residents. Elly Feldman, a city resident became our first president, and the association has grown and prospered over the years. 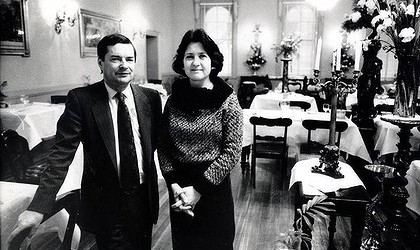 Photo : Mietta and Tony at their famous restaurant.