Tigers fans might eat cheese. If you were at the Queen Vic Market on Grand Final Saturday, you must have noticed the many stores decked out in Richmond colours. But the day was extra special for Dennis Husseini.

Dennis is the proprietor of the Pavillion store that specialises in high quality cheese and other delicatessen products. Just a few days after he bought the store in 2005, he met the Market Tour guides, Judy, Geraldine and Helen. When they came around to meet Dennis and to explain their promotional activities, one of them said “Where’s the Big Bell cheese, Dennis?” Dennis replied “What cheese?”

“Oh my goodness” they said. “Don’t touch the Bell! It’s one of the highlights of our tour! Don’t sell it or even cut it. The cheese was made in 1987. There were three of them delivered to the market back then and yours is the only one left. ”

The now 30 year old, Big Bell Cheese became a feature of Dennis’ store displayed prominently on the back shelf or sometimes on the front counter. It is really a famous cheese known as Auricchio Provolone piccante, made in Cremona a province in Northern Italy – South East of Milan. Evidently the cheeses are made in old church bells to give them the interesting shape.

Now Dennis and many members of his large family are Richmond supporters. Dennis looked at the cheese and thought that he might cut it when Richmond won the Grand Final. He told a few of his customers. They just laughed and said “Then you will never cut it!” Tour visitors would also laugh.

In 2009/10 Channel 9 came around on a market marketing campaign and they too roared with laughter. “No you will never cut the cheese, Dennis.” they said. But Dennis said “Hopefully, soon.” 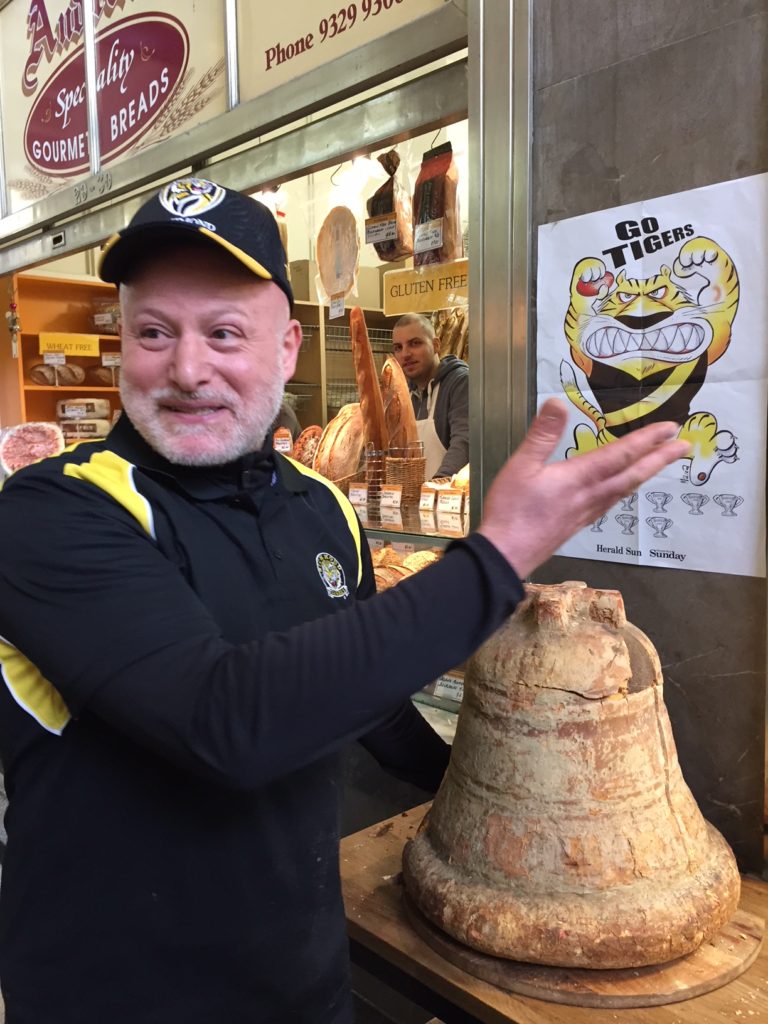 Now in the 2017 football season, Dennis started to feel that the time might have come. Both he and his customers who were football fans were commenting that the quality of play in the AFL was universally at a high standard. Many games during the season were more like Grand Final games. Initially though, no one was tipping Richmond to actually win – maybe in the final four, perhaps.

Then about one month before the Grand Final, Dennis started reminding nearly everyone about his vow to cut the Big Bell cheese if Richmond would win. This time his customers were not laughing. They thought that there was a chance. Finally, after hearing customers laugh at his idea for 12 long years there was a change in perception.

The Market marketing ladies got behind the idea and Channel 9 did another interview the Monday night before Grand Final day. On Grand Final Saturday morning, Dennis was particularly on edge. If Richmond won the cheese would be cut at 10:30am the next day. He and his family watched the match from home and then, the Tigers wanted cheese!

After Richmond’s definitive success and much celebration at home that night, Dennis and his sons went to the shop at 11 pm to prepare for the next day. They cut cheese for customers and visitors, further decorated the shop and set up music to play the Richmond song.

Duly at 10:30am sharp the next day, the Big Bell cheese was cut after 30 years maturing. It was still good and still edible – a little salty to the taste. Much like a parmesan cheese. You wouldn’t want to eat a lot of it though.

Dennis thought that big Cheeses like the Big Bell cheese are no longer made. However, we have since contacted the supplier in Northern Italy, only to find out that the Pavilion cheese is their 15 kgm size and they can make them up to 50 kgm.  Imagine that!  Dennis has informed us that he may purchase a few new Bell cheeses to cut when Richmond wins next year!