Remember scrolling through monthly building approval lists? Seeing a sign on the street about a new development and wondering why you didn’t know about it? Those days are gone.

Just late last month (21st June), the Lord Mayor Robert Doyle AC unveiled a new online 3D interactive tool, which, for the first time, provides a visual representation of buildings that are existing, approved, under construction or under application in Melbourne. The tool allows the user to zoom in and out and view the city from different angles.

The web address for the Development Activity Model as shown below is: https://developmentactivity.melbourne.vic.gov.au. 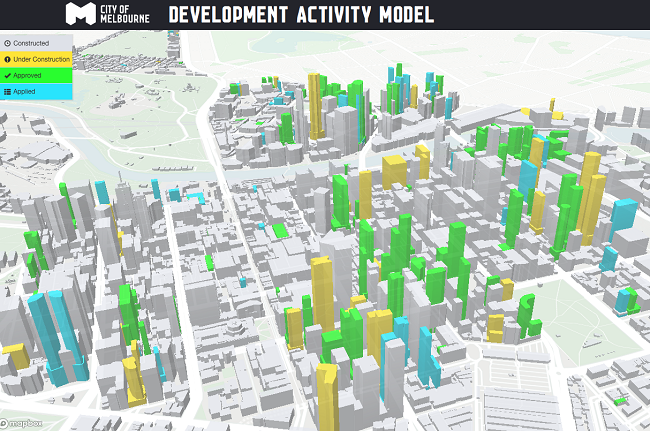 “It’s like Google Earth, except some of the buildings don’t exist yet. For the first time, we can see the level of building activity in Melbourne’s CBD in context. This is the first time an Australian Council has undertaken this kind of modelling and made it public,” the Lord Mayor said.

“The data behind the model, from the City of Melbourne’s Development Activity Monitor, reveals a large upswing in office construction in Melbourne as our reputation as a knowledge city and business hub continues to grow.”

The Lord Mayor said that the demand for student and family accommodation was driving residential construction. 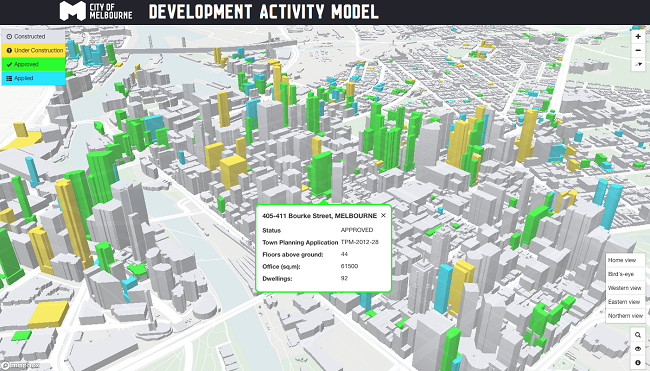 “There are more than 30,000 international students living in the municipality. Students want to live in the world’s most liveable city and this demand is reflected in the record level of student accommodation being built.”

The illustration below shows a close up of a section of the city. By clicking on a building, a dialogue box springs up to give details of the particular building.

The 3D model includes all development activity across the City of Melbourne, including developments the State Government has approved.

It uses the following colour coding:

Highlights of the Development Activity Monitor data include:

The City of Melbourne has been tracking residential and commercial development since 2002. To coincide with the Development Activity Monitor moving to 3D, data will be updated monthly, instead of every six months, allowing people to gain a more accurate picture of development happening in Melbourne.

The City of Melbourne developed the 3D model in partnership with the US-based mapping platform Mapbox, after being selected for the Mapbox Cities program in 2017. The partnership includes access to Mapbox’s web and mobile mapping tools, 2D/3D visualisation platform, and dedicated Mapbox staff support and resources.

Residents 3000 along with several other community groups took part in a focus group last November to provide feedback to the City of Melbourne team about the usability of the tool and the information it provides.

The City of Melbourne team behind the 3D Development Activity Model will be our guests at the Residents 3000 AGM on Thursday, 7th September 2017. 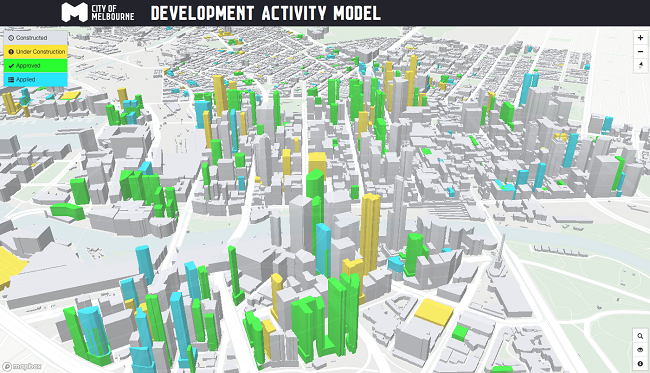