There is not enough space to store the bins.  How we can work smarter to solve the problem?

Melbourne’s street litter bins collect 4800 tonnes of waste every year. (Source: City of Melbourne web site).  As the number of visitors and residents continue to increase, they have introduced innovations to help keep our city streets clean and reduce litter in busy city locations. 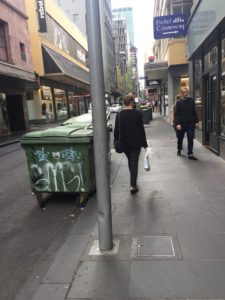 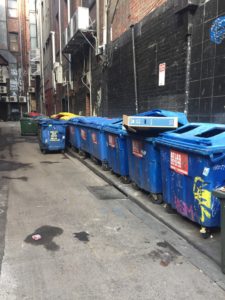 There is no space in the laneway. This is not a good look for livability. There has to be a better way. Surely!

Each solar-powered bin compacts the rubbish, holding up to 600 litres, compared to a standard public litter bin which holds only 80 litres. An SMS alert is sent to the waste contractor when the bin is 50 per cent and 80 per cent full. The aim is to empty the bin when it is around 80 per cent capacity to maximise the collection run efficiency. The bins will help reduce waste on our streets and minimise the number of garbage trucks on the road.

As another innovation, the City of Melbourne have partnered with local firm EYEfi to install smart sensors in 50 street litter bins on Docklands Promenades as part of a two-year trial. The smart sensors send a message to the waste contractor when the bin is nearly full and needs to be emptied. They also record and store information on how often bins need to be emptied to help plan future bin collections. The sensors help avoid overflowing litter bins on our city streets.

The Chair of the City of Melbourne’s Environment Portfolio, Cr Cathy Oke said “We will install more than 360 smart litter bins in the CBD following a successful trial of 14 bins last year. The new bins hold seven times the waste of a standard litter bin and will help to reduce garbage truck movements in busy CBD areas. We administer 2,496 public litter bins and 545 recycling bins across the municipality, with $9.8 million spent on waste services each year.”

The BigBelly Solar system is not just any old rubbish bin. It is the beginning of a smart, wireless and integrated system that can assist municipalities to solve a pressing problem and save money at the same time.

Well, that sounds just fine.  As residents of the city, we would like this problem solved sooner than later! 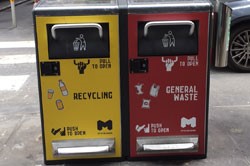